The Return of the Zimbabwe Dollar!

As of Monday, June 24, 2019 the Zimbabwe government is once again issuing Zimbabwe dollars and saying that the use of US dollars is illegal.

In a government gazette published on Monday, the president of Zimbabwe said: “The British Pound, US dollar, South African Rand, Botswana Pula and any other foreign currency whatsoever shall no longer be legal tender alongside the Zimbabwe dollar in any transaction in Zimbabwe”.

This means that the multi-currency system that Zimbabwe has been using has now come to an end and transactions are now to be conducted in local currency – the Zimbabwe Dollar (ZWL).

Most people in the tourism industry however believe this will apply like it does in all other countries and even in Zimbabwe before the US dollar became their currency (yes – Zimbabwe’s currency for the last several years has been the US dollar).

US dollars will be accepted at hotels and tourist facilities (and for tourist activities) but in local shops (supermarkets, curio shops, garages,  some restaurants, etc) bills must be paid using foreign debit/credit cards (where accepted) or with Zimbabwean dollars.

Prices are displayed in ZWL. When paying with a foreign debit or credit cards, this is converted to the foreign currency equivalent at the prevailing rate of exchange. This could pose a problem for future credit card use in Zimbabwe as there could be a wide disparity between the official US $ rate and black market rate making charges MUCH greater than you would expect… this has happened in the past.

Tipping is not a commercial transaction and hence visitors are at liberty to tip in whatever currency they wish. Small denominations are best.

Remember credit card facilities are not available at most Zimbabwean safari camps. Payments may be made in cash only. 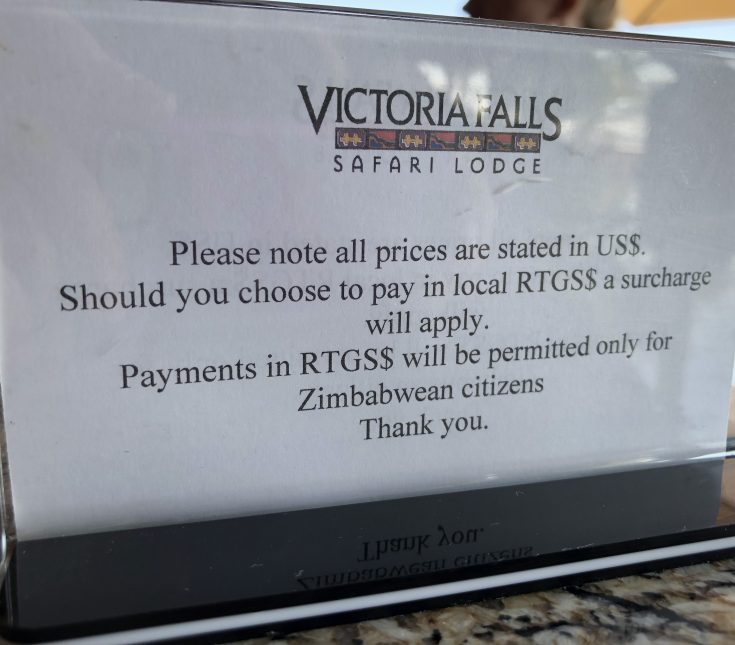 Despite the changes noted above entry visas must still be paid in US dollars. The Government of Zimbabwe has an e-visa system and travelers may apply and pay for their
visas online.