New Safari Camps and Lodges for 2018

The main photo of above is an artist rendering of the new Mombo Camp which is set to open mid 2018 in Botswana’s Moremi Reserve. Mombo has been voted the world’s #1 hotel several times and we are eagerly awaiting the new incarnation! A little tidbit – built on the same location as the previous Mombo Camp each of the new rooms will have its own plunge pool!

As one of the top safari planning companies in the USA, and member of the Safari Professionals of the Americas PR team, we are in constant contact with Africa’s leading safari outfitters… here is the latest news and our opinions on which safari destinations are heating up, what new camps and lodges are breaking ground, and which are being rebuilt for 2018… In short here are the safari places that we are excited about for 2018 and beyond!

In East Africa Kenya is getting a lot of traffic despite the US travel warning and mediocre game viewing… despite some awesome places to stay I personally don’t like my game viewing to include cows, goats, and crowds of budget tourists. As a country they have bungled their conservation efforts and massive declines in animal numbers have been the result.

Once sleepy Tanzania has really taken off over the last 10 years. It now has numerous first rate options although crowds and biting insects are issues in some areas. Singita Mara River and Sayari have the best locations for wildebeest river crossings in the northern Serengeti. At Singita Grumeti Reserve wildlife viewing has really improved over the few years. New’ish Namiri Plains is incredible for cheetah. Alex Walker’s camps are popular as each booking gets private activities at no extra cost. For 2017 the brand news Roving Bushtops is really well done with a nice central location. In Tarangire Olivers and Swala are our go to properties far from the crowded entry gates. Greystoke Mahale is a bucketlist destination for chimpanzee trekking. For all out luxury and exclusivity Mwiba can’t be beat. 2017 saw Entamanu open at Ngorongoro Crater but I feel tented camps aren’t ideal there due to cold night time temperatures and frequent rain. The Crater feels nicer in a lodge with a roaring fire! We love Crater Lodge and Gibbs Farm. In Ruaha we are looking forward to checking out Jabali Ridge in 2018… it should be a hit. Skip the Selous as it has been poached out. Forest Chem Chem will open in Tarangire – exclusive use only.

Rwanda is hugely popular these days and availability is often an issue 12+ months in advance. Popular properties such as Volcanoes Virunga Lodge and Sabinyo Lodge are facing new competition for the first time. Southern African big boys Wilderness Safaris opened Bisate Lodge for gorilla trekking in 2017. Awesome property! They know what they are doing. The One and Only have taken over Nyungwe and renamed it Nyungwe House. Set on a tea plantation this is a very cool spot to visit… you can trek for wild chimpanzees here but as the chimps are not habituated that aspect can be a bit disappointing. One and Only also plan to open Gorillas Nest near the Virungas for gorilla trekking in 2018. Luxury hotel chain the Four Seasons are surprisingly in the game and we await news on that front. Lastly luxury operator Singita will open a Rwanda gorilla trekking property in August 2019… it will be called Kwitonda and it will have 8 suites and a villa. Kwitonda will connect nicely with their luxury properties in Tanzania. 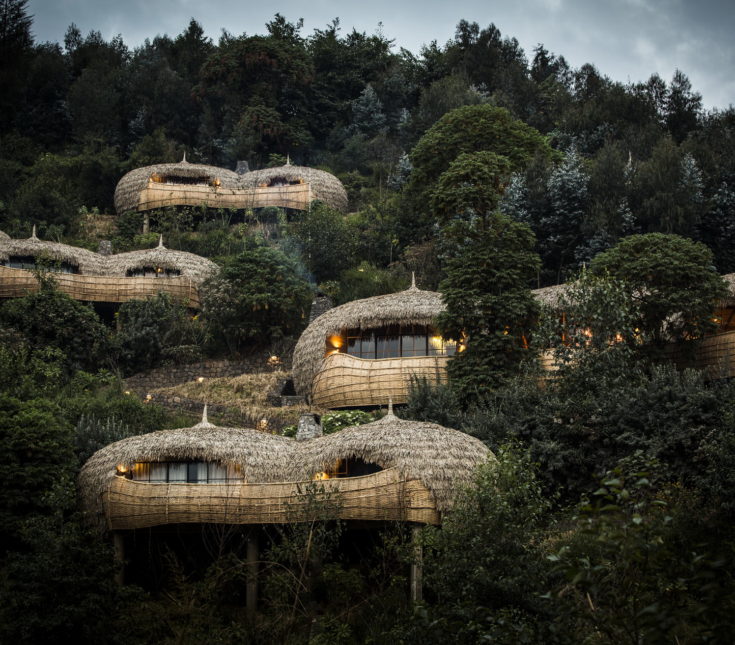 In Uganda tourism continues to grow. Gorilla trekking in the Impenetrable Forest is a great value although quite a bit more difficult to get to than the trekking areas of Rwanda.

In southern Africa Botswana is the king of safaris – untouched Africa with staggering amounts of wildlife, comfortable weather most months, few crowds, few safety concerns, and few insects. Botswana has some of Africa’s most progressive conservation initiatives including a ban on sport hunting of big game (most travelers are not aware that nearly all safari countries allow sport hunting of animals such as lion, elephant, leopard…). The newly built Duba Plains is awesome and Selinda Explorers is one of our favorite adventurous camps to spend a few nights at. Other top camps include Jack’s Camp, Duma Tau, and Chitabe. In 2017 Kwetsani opened after a rebuild and is gorgeous! New camps like Machaba, Gomoti Plains, Sable Alley (formerly Banoka Bush Camp), and Meno a Kwena are good value and big hits as well – they have some serious safari veterans pulling the strings and we are very confident in the experience they offer. Feline Fields, new for 2017, is not a big hit… skip it!  In late 2017 a new Classic (mid range) camp, similar in style to Vumbura Plains, will open in a concession near Chitabe. It will be name Qorokwe. For 2018 the world’s #1, Mombo and its sister camp Little Mombo, will reopen January 28, 2018. Each of the new rooms, built on the site of the old rooms, will be larger and include private plunge pools. All Ultimate Africa Safaris clients booked at Mombo Trails will be upgraded free of charge! Kings Pool Camp in the Linyanti will be completely rebuilt in 2018. Interestingly Ker and Downey will open their new Dinaka Camp in Botswana’s Central Kalahari in March of 2018. Great Plains Conservation will open Selinda Pioneers Camp way up the Selinda Spillway – this area is PACKED with wildlife like 1920s Botswana! Great Plains will also move Duba Expeditions to a new location in the Duba concession.

Zambia rarely finds itself in the spotlight despite some awesome game viewing and superb properties. You cannot go wrong with Chiawa, Sausage Tree, and Chinzombo as examples. At Victoria Falls Tongabezi, the River Club, and Toka Leya are the most popular with African Bushcamps brand new Thorntree Lodge providing some good competition. For 2017 Liuwa Plains is on the map with the opening of King Lewanika Lodge (formerly Liuwa Plains). This place offers a front row seat to Africa’s 2nd largest wildebeest migration however this is dependant upon new grass growing and occurs in roughly November when many other Zambian properties are closed due to the rains. Also nearby Victoria Falls has little water coming over at this time of year… bummer!

Zimbabwe offers not only awesome up close wildlife viewing with Africa’s most highly trained guides but some really high end, great value places to stay. For those who find Botswana and Tanzania too expensive Zimbabwean camps like Zambezi Expeditions and Somalisa are wonderfully comfortable and a bit lighter on the pocket book! Newly rebuilt Ruckomechi Camp and Linkwasha are two of our favorites and work well for even luxury travelers who want a bit of savings. Ultra luxury Pamushana is STUNNING – if you have the dosh make sure to spend 3 to 5 nights here. It will be undergoing a refurb / rebuild from mod January through mid May 2018. On the Zimbabwean side of the Falls the historic Victoria Falls Hotel remains hugely popular. New deluxe rooms at Ilala Lodge are a good value and their Palms Restaurant is our favorite at the Falls. Matetsi was rebuilt and opened in late 2016 – great for high end travelers. Elephant Camp will see the end of actual elephant back safaris and instead offer walks with the elephants where guests can learn about how the orphaned elephants were saved from culling operations and circuses to remain in Africa… Robin Pope Safaris opened John’s Camp in Mana Pools in 2017. Luxury Stanley and Livingstone has been taken over by More Hotels (owners of Lion Sands Ivory, Cape Cadogan and several other properties in South Africa) and will shut down late 2017. It will reopen mid 2018 after a rebuild / refurbishment. Great Plains Conservation just stopped by and confirmed they have secured land west of Mana Pools – in the Sapi Concession where they will offer a 6 night safari with nights spent on star beds as well! We should expect 2 camps similar to Duba Expeditions and Selinda Explorers there mid June 2018… and another Great Plains luxury lodge will be built in the Zambezi National Park about 20 minutes from Victoria Falls (Mpala Jena area)! This too will open mid 2018… Also close to the Falls, in the Zambezi National Park, Wild Horizons will open Old Drift Lodge mid 2018… this should be a great option only 4.5 kilometers from the Falls.

In South Africa there are SO MANY great places to stay but only a few offer superb wildlife viewing. Our favorites wildlife lodges include Tswalu, Molori, Singita Boulders and Ebony, Mala Mala and Rattrays, Lion Sands Ivory, Tinga and Narina…  other cool spots to visit? Birkenhead House, Grootbos, Bushman’s Kloof… there are simply too many. In Cape Town the Cape Grace continues to charm, the Victoria and Alfred Hotel refurbishment / construction is done, the new ultra luxury Silo is now open, Ellerman House continues to provide one of the most exclusive experiences. The One and Only attracts those who tend to worry what others think about them… and lastly a bit about two of our Cape favorites – the 5 star Twelve Apostles (the 12A) where we have arranged for our clients to receive a 4th night free and suite upgrade guaranteed, and Tintswalo Atlantic – the only property in the Cape set within the National Park and one of the most overlooked lovely places in all of Africa! Also in Cape Town the opening of the Zeitz Museum of Contemporary Art Africa highlights gifted artists “from Africa”.

In Madagascar Miavana is the country’s first truly 5 star lodge  – beyond beautiful on all levels! The ultra luxury experience is located on a  pristine island surrounded by reefs teaming with Indian Ocean fish. Each of the luxury villas with private pools, butlers, top chefs, great diving, helicopter access to visit the lemurs on the mainland – a destination to visit by itself after a high end wildlife safari on mainland Africa. 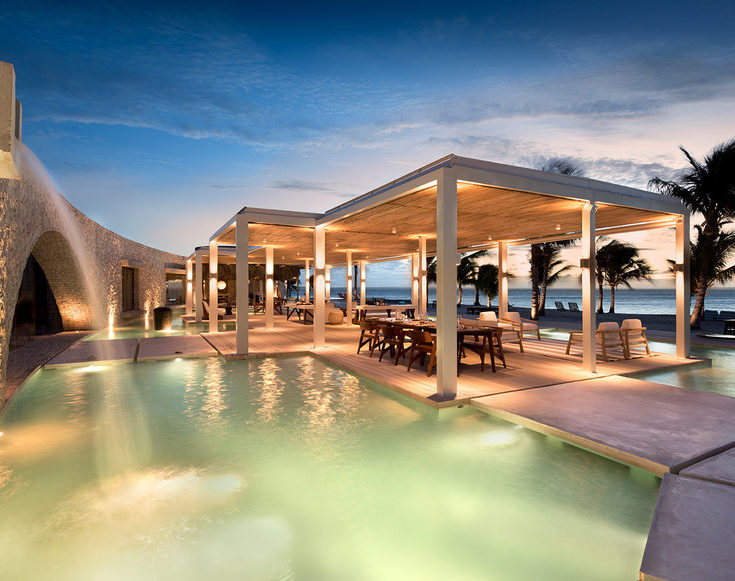 Mozambique is popular with honeymoon travelers – Azura Quirimbas is lovely as is Azura Benguerra. Nearby AndBeyond Benguerra is a great luxury option as well although service can be a bit cold… it doesn’t have the warm / welcoming feel of Azura Benguerra. Villa Santorini, near Vilanculos, is worth checking out as a possible option… it is run by the former owners of the world’s most exclusive honeymoon spot – North Island – so they know a thing or two about luxury!

Coming soon – Ethiopia is starting to take off. Ancient churches cut into the red rock, finger licking anjeera (local bread served with the national dishes) and a vibrant metropolis of Addis Ababa gives any traveler a diverse view of this modern African nation.

Air travel wise there is a new direct flight between Cape Town and Victoria Falls, we are watching to see if South Africa’s national airline, South African Airways, will go bankrupt, and there is word of direct flights from the USA into Cape Town starting up in 2018!