As of late October 2019 water levels are currently 11 cm below the 10 year average. However, they are 3 cm higher than the lowest level recorded in 1995 and the falls are unlikely to reach 1995 lows.

In a typical year the river reaches its lowest level around November 15 before beginning to rise again.

This time of year, when we refer to the Falls as “Victoria Walls” there is always more water flowing over the Zimbabwean side of the Falls as it is slightly lower than on the Zambian side. On the plus side the October water levels and warm weather are perfect for travelers who wish to visit the Devil’s Pool in Zambia or go river rafting expeditions.

Our partners at Wild Horizons, on the Zimbabwean side of the Falls have put together a great photo guide to the Falls. 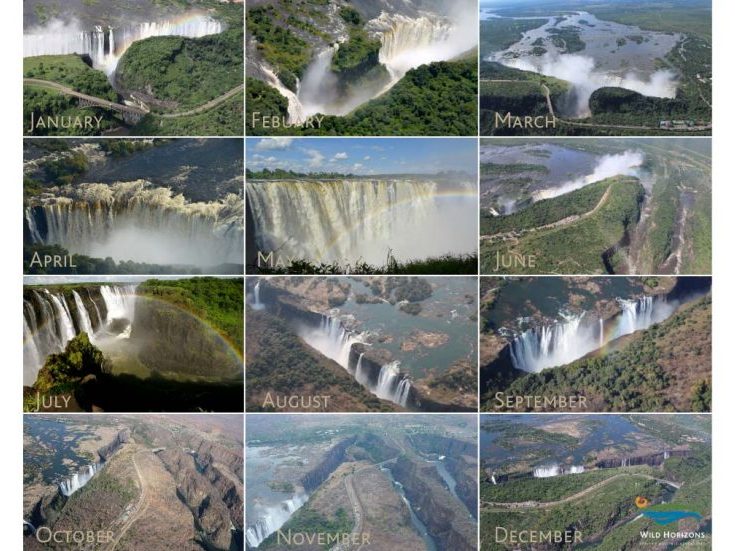 January – The height of the rainy season and the Victoria Falls is reaching towards peak flow, with a massive volume of water cascading into the gorge. You will undoubtedly get drenched and the thick, green vegetation is decorated with bursts of color as rainforest flowers bloom.

February – The Smoke that Thunders reaches amazing heights during February, joining the clouds that languish above the rainforest. Almost every section of the rainforest is caught in a constant shower of vapor that swells up from the bottom of the gorge.

March – The rainy season is waning but the river levels remain high.

April – It is the end of the rainy season, but catchment areas upstream in the Zambezi continue to nourish the Victoria Falls. The waterfall reaches its highest flow with an average of 500 million liters of water crashing over every minute. The highest ever recorded was 700 million liters in 1958.

May – Autumn in Southern Africa settles in, casting golden hues onto the trees. While the leaves slowly fall, the Zambezi continues a strong and steady flow despite the advent of the dry season.

July – In the absence of rain, the Mopane leaves take on their distinct winter hue of burnt orange. The waterfall still boasts an impressive flow of water, and due to the diminished water sources in the bush, game viewing is excellent as wildlife begin to congregate around the river and larger water sources. The bush may be dry but the Victoria Falls still creates rain on these cloudless days.

August – A chill creeps into the night, but the days remain warm. Gradually, the rock face emerges as the water trickles to a gentle ebb on the Eastern Cataract on the Zambian side of the waterfall. However, the Main Falls maintains an impressive curtain of falling water, and as the mist dies down, photo opportunities within the rainforest are exceptional. As the seasons shift, more elephant migrate to the islands, which are the feeding ground in the drier months.

September – Daytime temperatures start to climb. White water rafting is excellent this time of year due to the low water levels.

October – This is the hottest month of the year as the region builds up to the rainy season. Occasionally, the sky cracks open with in a torrential African thunderstorm bringing some relief to the landscape in a short, dramatic burst. The Eastern Cataract is usually dry this time of year, but the view of the Victoria Falls from the Zimbabwean side is as beautiful as ever.

November – The water levels are their lowest this time of the year, and while the thunderous roar of the waterfall has been tamed, the natural wonder still inspires a sense of awe and incredulity.

December – The rainy season is approaching, and storm clouds loom ominously over Victoria Falls. The cloud cover brings some respite from the hot days, and the waterfall begins to rise rapidly with rains from catchment areas. By now the Eastern cataract will no longer be exposed and there is a sense of anticipation and excitement as the promise of rainfall rumbles overhead.